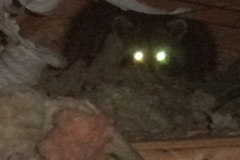 This animal conserves energy during winter through inactivity, not hibernation.

The raccoon gets its English name from the Algonquian Indian word arakun, meaning “he scratches with his hand”. It develops its familiar facial mask by about 10 days of age, usually before the eyes are open. It is one of the few creatures that appears capable of making the adjustment from family pet back to wild animal.

The common raccoon Procyon lotor is probably best known for its mischievous-looking black face mask. Raccoons are usually a grizzled grey in colour with a tail marked by five to 10 alternating black and brown rings. Body coloration can vary from albino, (white) to melanistic (black) or brown. An annual moult, or shedding, of the fur begins in the spring and lasts about three months.

The head is broad with a pointed snout and short rounded ears measuring 4 to 6 cm. The eyes are black. Total body and tail length for adults averages 80 cm; males are generally 25 percent larger than females. Raccoons in northern latitudes tend to be heavier (6 to 8 kg) than their southern counterparts (4 kg). However, fall weights for adults have reached 28 kg in some areas. 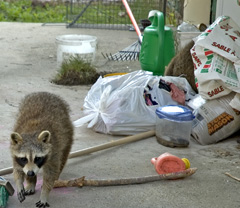 Raccoons are able to live in a wide range of habitats. The only apparent requirements are a source of water, food, and a protected area for denning. The best habitats are hardwood swamps, floodplain forests, fresh- and saltwater marshes, and farmland, both cultivated and abandoned. On the prairies, raccoons are most abundant in woodlot and wetland areas. This highly adaptable animal is also very common in many cities of North America.

Movements and home ranges of raccoons vary greatly depending on habitat, population density, and food supply. The home range is the area used by an animal for food, water, and shelter in its normal, day-to-day movements. In rural agricultural areas of eastern North America, home ranges between 1 and 4 km2 are common, whereas in prairie habitat, raccoons have used areas as large as 50 km2. At the other extreme, the area used by urban raccoons has been documented at less than 0.1 km2. Generally, home ranges of individual raccoons overlap, and there is little evidence of territoriality, especially in urban areas.

Winter denning allows the raccoon to conserve energy in the form of fat reserves when food is not available. This is not hibernation, but a period of inactivity. The body temperature does not drop, and the animal’s activity appears to be governed by the air temperature. Preferred denning sites include hollow trees, stumps, logs, caves, vacant groundhog or fox burrows, and buildings such as barns. In city areas, denning sites include residential chimneys, sewers, garages, attics, trees, and culverts. Adult males usually den alone, but the family unit often dens together during the first winter. Communal dens containing as many as 23 raccoons have been reported; however, four to five is more common. Although usually one den is used during the winter, several different dens provide sanctuary during other seasons.

Raccoons are omnivorous and will consume practically any food item, plant or animal. They prefer corn, crayfish, fruits, and nuts, but there is a seasonal shift in diet depending on availability of food items. During the spring, animal matter, including invertebrates, or small animals without backbones, and insects, makes up the major portion of the diet. While they prefer crayfish, raccoons also consume muskrats, squirrels, rabbits, waterfowl eggs, and freshwater clams. In the summer, plant material, including fruits and nuts, becomes more important. Wild cherries, gooseberries, elderberries, wild grapes, strawberries, and garden items such as potatoes and sweet corn are relished. They also eat frogs, small fish, turtles, beetle grubs, grasshoppers, earthworms, crickets, and snails during the summer.

The fall diet is extremely important for raccoons in northern latitudes because they must accumulate sufficient fat reserves to sustain them during winter denning. The raccoon builds up fat over its entire body, even around the tail bone. It may be 2.5 cm thick on the back. In fact, by late fall about half of the animal’s total body weight may be fat. In northern areas the raccoon lives on its stored body fat during the winter, but farther south where nuts and corn are plentiful it continues to hunt for food year-round. In suburban areas, raccoons often raid garbage bins or hunt for earthworms, beetles, and grubs on residential lawns. Raccoons can also be a menace to farmers because they may eat domestic fowl and eggs.