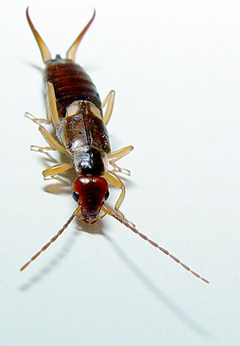 The common name “earwig” is derived from a European superstition of ancient origin that these insects enter the ears of sleeping persons. Despite their formidable appearance and reputation, earwigs are not directly harmful to humans. Indeed, earwigs are often beneficial in habit, acting as scavengers of decaying matter and predators of insect larvae, slug eggs, aphids, and other garden pests.

Native of Europe, the European earwig was first sighted in what is now Canada at Carbonear, Newfoundland, as noted in a report covering the period 1827-1835. Its presence was also recorded at Newport, Rhode Island in 1911. Having few North American predators, it moved west to California and then rapidly made its way north. In many areas of eastern Canada and British Columbia it has become a garden pest. The earwig can damage leaves, fruits, vegetables and flowers, particularly when plants are young. When earwigs are numerous, they may invade homes but will not breed indoors.

The length of the adult earwig is approximately 1.5 to 2.0 cm long. It is elongated and flattened, with a tough, shiny, reddish-brown exoskeleton and antennae about half as long as the body. This insect is distinguished by prominent pincers, or forceps, at the end of its body. The male has a large, curved pair, whereas the female’s are smaller and nearly straight. The earwig uses these fierce looking appendages during courtship, and in defense to grasp attacking insects . Adult earwigs have small, leathery wings; to fly, they must take off from a high place as their wings are not strong enough to lift them from the ground.

Lifecycle of the Earwig

Earwigs live only one year. They spend the winter hiding just below the soil surface, usually close to house foundations. Warm weather brings them out of hibernation. In the spring, each female lays as many as 60 round, pearly white eggs in a nest in the top 5 cm of the soil. The mother tends the young in the nest for the first two weeks. When they are about 6 mm long, the young leave the nest in search of food. An earwig will shed its skin, or moult, four times before reaching adulthood in about 70 days. The young are similar in general appearance to the adult, but smaller. About one fifth of the females lay a second batch of eggs in June. The young from these appear in July and August.

During the day, earwigs like to hide in cool, dark, moist places. They crawl under stones, into garden rubbish, in tubular legs of garden furniture, wooden fences, hollow aluminum doors and in other cracks and crevices.

Earwigs come out of hiding at dusk to begin foraging. While decaying organic matter forms the largest part of their diet, they also feed on the tender shoots, leaves and blossoms of such flowering plants as marigolds, roses, carnations, clematis, dahlias, zinnias, gladioli, chrysanthemums and asters. They can chew on garden vegetables such as lettuce, celery, potatoes, beans, carrots, sweet corn and cole crops. Earwigs are also carnivorous, eating other small insects and sometimes even each other.

In search of food and shelter, they crawl over the ground, climb houses, fences and trees, and usually begin to infiltrate homes in June or July. What is particularly objectionable is to find these insects among foodstuffs, clothes and occasionally between bed covers.