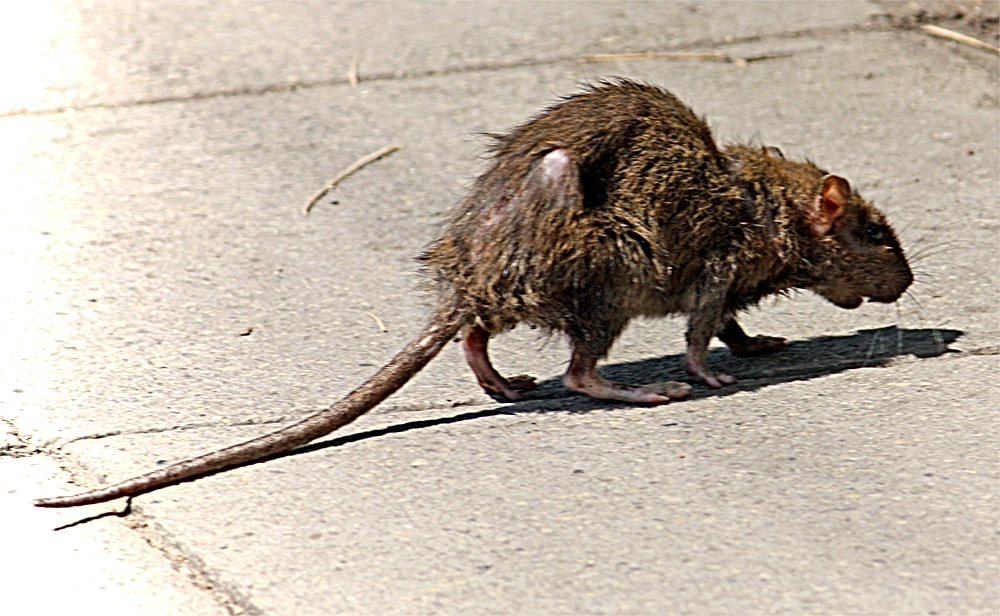 Where There Is One – There Is Many

The fur is coarse and usually brown or dark grey, the underparts are lighter grey or brown. The length can be up to 25 cm (10 in.), with the tail a further 25 cm (the same as the body length). Adult body weight averages 350 g in males and about 250 g in females, but a very large individual can reach 500 g (17.64 oz). Rats weighing over a kilogram are exceptional, and stories of rats as big as cats are exaggerations, or misidentifications of other rodents such as the coypu and muskrat. Brown rats have acute hearing and are sensitive to ultrasound, and also possess a very highly developed olfactory sense. Their average heart rate is 300 to 400 beats per minute, with a respiratory rate of around 100 per minute. Their vision is poor, around 20/600 for normal rats. They are dichromates who perceive colours rather like a human with red-green colorblindness, and their colour saturation may be quite faint.

The brown rat is a true omnivore and will consume almost anything, but cereals form a substantial part of its diet. Martin Schein, founder of the Animal Behavior Society in 1964, studied the diet of brown rats and came to the conclusion in his paper “A Preliminary Analysis of Garbage as Food for the Norway Rat” that the most-liked foods of brown rats were (in order) scrambled eggs, macaroni and cheese, and cooked corn kernels. According to Schein, the least-liked foods were raw beets, peaches, and raw celery. They are usually active at night and are good swimmers, both on the surface and underwater, but unlike the related Black rat, Rattus rattus, they are poor climbers. Brown rats dig well, and often excavate extensive burrow systems. A 2007 study found brown rats to possess metacognition, a mental ability previously only found in humans and some primates.

The brown rat can breed throughout the year if conditions are suitable, a female producing up to five litters a year. The gestation period is only 21 days and litters can number up to fourteen, although seven is common. The maximum life span is up to three years, although most barely manage one. A yearly mortality rate of 95% is estimated, with predators and interspecies conflict as major causes. Brown rats live in large hierarchical groups, either in burrows or subsurface places such as sewers and cellars. When food is in short supply, the rats lower in social order are the first to die. If a large fraction of a rat population is exterminated, the remaining rats will increase their reproductive rate, and quickly restore the old population level.

Rats live almost everywhere people live. It is often said that there are as many rats in cities as people, but this varies from area to area depending on climate, living conditions, etc. Brown rats in cities tend not to wander extensively, often staying within 20 meters (65 ft) of their nest if a suitable concentrated food supply is available, but they will range more widely where food availability is lower. In New York City there is great debate over the size of the rat population with estimates from almost 100 million rats to as little as 250,000. Experts suggest New York is a particularly attractive place for rats because of its aging infrastructure, high moisture and poverty rates. In the United Kingdom some figures show that the rat population has been rising, with estimations that 81 million rats reside in the UK. Those figures would mean that there are 1.3 rats per person in the country. High rat populations in the UK are often attributed to the mild climate, which allow them higher survival rates during the winter months.