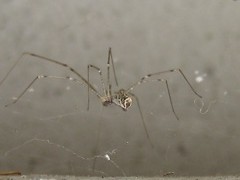 Spiders are usually found in corners of rooms, closets, boxes, dark crevices, basements, garages, and gardens. Spiders are excellent pest controllers. Wolf spiders are especially beneficial to farmers and gardeners because they prey on common crop pests such as cottonworms, gypsy moths and pea aphids. Spiders do not transmit any diseases. Although nearly all spiders have venom glands, they rarely bite humans and only a few species, such as the black widow spider, can have a dangerously venomous bite.

The spider has an unsegmented body with two main divisions, four pairs of walking legs and organs for producing silk which is used for making nests, webs to catch prey or cocoons for its eggs. Spiders can have up to eight eyes. With so many eyes, it is surprising that most spiders are near-sighted. Many spiders prey on pests such as flies, mosquitoes, plant hoppers and gypsy moths that get caught in their webs. Once the prey becomes tangled in the web, the spider immobilizes it by wrapping it in more silk and then injecting venom to paralyze it. Later the spider injects a predigestive liquid and sucks out all the nutrients from its prey. Most spiders are nocturnal, shy, and avoid confrontation by running away. They will only bite if squeezed or held.

Wolf spiders are unusual because they do not build webs but rather hunt for their prey. These spiders can be as large as 3 cm in length and are dark brown in colour. They are generally found in grasslands, woodland floors, beaches and gardens.

These spiders have very long legs and build their webs in the corners of cellars or cool, damp basements. Cellar spiders are harmless and can be eliminated by removing the webs and reducing the humidity in that area of the house.

Although fishing spiders resemble wolf spiders they have a different eye pattern. The adults can reach up to 7.5 cm in width. They are commonly found near cottages and waterfronts, especially around rocks near the shoreline. These spiders forage for their prey and the females only spin webs to surround their eggs, which they guard.